Home Catechetical Corner Palm Sunday: Death is a teacher, with its own wisdom to impart

Years ago when I taught high school theology, I was tasked with developing a curriculum for senior students focused on bioethics and the church’s moral tradition. The course explored issues informed by philosophy, biology, technology and theology.
It was challenging to teach since it dealt with neuralgic issues: from contraception to abortion to in vitro fertilization to organ donation.
At year’s end, we covered end-of-life issues, physician-assisted suicide and euthanasia. It wasn’t a happy way to end the course, but it was necessary. After all, the church is concerned with the whole span of a person’s life — from conception to natural death — as well individual and communal rights and responsibilities.
When introducing a new topic, I’d take a poll to gauge where students fell on an issue, to shape my approach and measure moral development. I found that teenagers’ initial

judgments tracked closely to popular opinion, since teens (as a demographic) favor unrestricted autonomy and are highly skeptical of authority.
I noticed two trends in polling on end-of-life issues: 1) they argued that researchers should pursue the development of cures by any means; and 2) when facing an incurable illness, a person should have the right to take his own life if he feels this is the only way to die with dignity.
The first position was easy to dismantle if the students were on board with the church’s position on abortion. If an embryo is a human person at the earliest stages of development, then the willful destruction of that life can never be considered a moral good, even if there are possible benefits to others.
It didn’t hurt to present them with cases that proved that adult stem cell research, which uses a person’s own cells for treatment, was proving to be more effective than embryonic stem cell treatment for a host of illnesses and conditions.
The second position was harder to challenge. They rightly empathized with people who receive devastating diagnoses: those who will face the loss of control over bodily and cognitive functions, who anticipate experiencing severe pain and who will be rendered utterly dependent upon others.
To date, there are nine states (plus the District of Columbia) in which physician-assisted suicide is legal, with more surely to follow.
Despite the important cautions being put forward about how these bills threaten the doctor-patient relationship, stand in contrast to suicide prevention campaigns and will exert economic pressure on patients, the bills’ language appeals to compassion, choice, dignity and mercy.
Against that cultural framework, I found it hard to make a case for why helping a person to die was not a compassionate or merciful thing to do.
I set aside polemical arguments in exchange for a viewing of “Of Gods and Men,” a film that chronicles the story of the Trappist monks at Thibirine, who served the Muslim population in Algeria during a civil war and who were kidnapped and killed by the Armed Islamic Group in 1996.
My students were understandably confused: Why were we watching a foreign film about French monks during a lesson on assisted suicide?
I told them that I wanted to explore the question, “If you knew you were going to die, what would it mean to die with dignity?” from another perspective.
While execution is not the same as illness, I was hoping it would benefit them to witness the monks’ deliberate decision, both individually and communally, to remain with the community they served, to love them and be loved by them until the brutal end that they foresaw and expected.
The exercise worked for many students. A majority of them came to conclude that in our culture, one in which autonomy is sacred and natural communities have broken down, to suffer until the end makes little sense.
But for Christians, dying with dignity means using every last bit of time that we are given, no matter our quality of life or the kind of death that we will meet, to love and to allow others to love us. “Compassion” means “to suffer with.” Death is not meant to be a solitary act.
It’s the lesson that the Lord leaves us with in this season of Lent, most visibly beginning on Palm Sunday and ending on Calvary.
Jesus enters Jerusalem, fully aware of what is to befall him. And yet, as St. Paul writes, he was “obedient to death, even death on a cross.” Crucifixion was both painful and humiliating. Jesus, who “was in the form of God” but who came “in human likeness” makes it possible for God to understand our mortality — the worst of it — by entering into it.
To those arguing for a person’s right to take his life, the model of being “obedient to death” would seem like the ultimate loss of freedom.
But the word “obey” means “to listen.” Death is a teacher, with its own wisdom to impart. That wisdom, for the Christian, consists of paying attention to the Lord’s final earthly lesson: That while there is still life, there is still time to love.

Elise Italiano Ureneck, associate director of the Center for the Church in the 21st Century at Boston College, is a columnist for Catholic News Service. 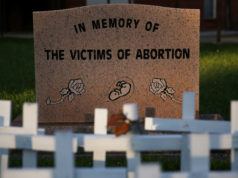 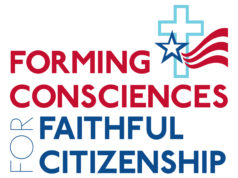 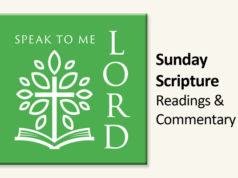