WASHINGTON — Builders, church leaders, choir members and journalists gathered atop eight floors of scaffolding, 159 feet high, in the Basilica of the National Shrine of the Immaculate Conception Oct. 28 for the blessing of the workspace where a new mosaic will be installed on the shrine’s Trinity Dome.

“It will be a wonder to behold,” said Washington Cardinal Donald W. Wuerl of the dome, which is expected to be completed by the end of next year. The mosaic will depict the Trinity, Mary and 13 saints associated with the United States or the national shrine, the four evangelists and words from the Nicene Creed.

The finished dome also will mark the completion of the national shrine, according to the original architectural plans for the church set to mark its centennial in 2020, the 100th anniversary of the placement of its foundational stone.

During the blessing, Cardinal Wuerl offered prayers for the success of the project and the safety of the workers involved. He said the shrine puts into “image form” the message of the Gospel and does so “in a way that everyone can bask in its beauty.”

He said the finished dome, with its emphasis on American saints, will remind people of the “face of who we are and the face of God.” He also said it will reflect “living images of God and living images of everything we are capable of being.”

In introductory remarks, Msgr. Walter Rossi, rector of the national shrine, stressed the parallels between the mosaic design on the dome and the very character of the shrine itself, representing a mosaic of Catholic parishioners from every corner of the globe.

He said a one-time collection for the dome work will take place on Mother’s Day, May 14, 2017. The last time a national collection was done for the shrine was in 1953 when it was being built.

The mosaic work is being done at the Travisanutto Giovanni mosaic company in Spilimbergo, Italy, and will be shipped to the national shrine in 30,000 sections weighing 24 tons and composed of more than 14 million pieces of glass.

Cardinal Wuerl, who blessed the work site, the workers and those present, urged the group of about 90 people at the ceremony to be sure they touched the wall of the dome before they left “because you’ll never have a chance to do it again.”

Remind yourself, he said, that this is “the completion of a 100-year project” which reflects to whoever comes in this building that God is with us. 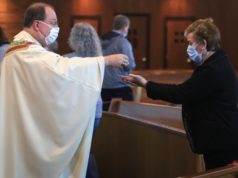 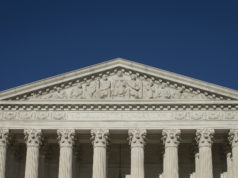 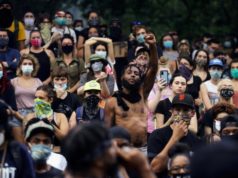