WILMINGTON – The past year presented serious challenges to first responders in Delaware, but they continue to show the self-sacrifice necessary in that line of work, Msgr. Steven Hurley told police, firefighters, emergency medical technicians and others at the annual Blue Mass. The service was held Oct. 6 at St. Elizabeth Church in Wilmington, postponed from its usual first Friday in May at St. John the Beloved Church because of a funeral for a state police trooper.

The Mass was dedicated to the trooper, Cpl. Stephen Ballard, as well as others who died in the previous year: Lt. Steven Floyd of the Delaware Department of Corrections; Patrolman Robert DaFonte, Cpl. Thomas Hannon and Cadet James Watts of the Dover Police Department; Lewes firefighter Timothy McClanahan; and the three Wilmington firefighters killed and one seriously injured last September at a house fire near St. Elizabeth. The deceased firefighters are Lt. Jerry Fickes, Lt. Ardythe Hope and Capt. Christopher Leach. Firefighter Brad Speakman of Wilmington, who was seriously injured in the same fire, was also honored.

“These men and women embody our Gospel, dying in the service of others — ‘no greater love.’

“It reminds us of the inherent danger in the work that we do,” said Msgr. Hurley, an Ocean City, Md., police officer for eight years.

First responders are often not acknowledged because on most days they do their job so well, Msgr. Hurley added.

“You respond with boldness, risking your safety for strangers,” he said. “We thank God for you. We also thank your families. They, too, sacrifice.”

The move from police officer to priest is not as far-fetched as one might think. As a priest, Msgr. Hurley said he and police officers often see “the unique side of humanity,” and, unfortunately, death is a part of that. Both are in the business of caring for souls.

“To be sure, we go about it in very different ways, but our goal is the same,” he said. “You provide assurance and hope” to those in need.

Msgr. Hurley, vicar general of the diocese and also pastor of St. Thomas the Apostle Church in Wilmington, told the congregation of a homeless man who often attends morning Masses at the church. He is reassured when he visits St. Thomas because the people are interested in his welfare. Jesus was drawn to these kinds of folks, and the police are as well. It is important to treat everyone with dignity, Msgr. Hurley said.

“You might be the only source of a kind word or gesture. Each of us is called to be Christ to others,” he said.

The priest encouraged the first responders to avoid becoming jaded or discouraged. “Remember who you are and that what you do is noble. You are messengers of hope in a world that hungers for encouragement.” 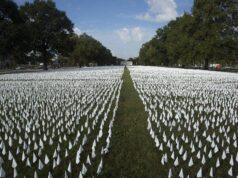