VATICAN CITY — World-renown physicists, who study everything from imperceptible particles to the expanding cosmos, came together for a Vatican-sponsored conference on the “new frontier of physics” — the sub-nuclear world of electrons, hadrons and neutrinos.

From the ancient Greeks to the Nobel Prize-winning scientists of today, humanity has sought to delve into the nature and origin of matter and discover the basic building blocks of the universe.

The Pontifical Academy of Sciences provided a forum for about 52 experts to showcase the latest discoveries when it hosted an international symposium Oct. 30-Nov. 2 on the future of sub-nuclear physics and the puzzles left to piece together.

Lucio Rossi, a physicist at CERN, the European Organization for Nuclear Research laboratory in Geneva, said that with every new discovery, science learns that “what we know is still not perfect” and may never be.

“People really think that science can give the truth. But science doesn’t give truth with a capital ‘T.’ Science gives some piece of truth,” but is never definitive, he told Catholic News Service Nov. 1.

Knowledge and certainty are like a path “where you arrive slowly toward something, toward our destiny, toward global truth, the final truth,” he said.

But “science indicates that this path is really kind of infinite here in the finite world” because as soon as someone discovers the answer to one question, it opens up a whole new set of questions, he said.

“The more we know, the more we are conscious of our ignorance,” said Rossi.

One great question facing physicists is why, after the Big Bang, there is no anti-matter left in the observable universe, said Frank Close, a particle physicist and professor at the University of Oxford.

Einstein discovered that energy can turn into matter and anti-matter, Close said. But 13.6 billion years after the Big Bang — an event marked by a very high concentration of energy — the anti-matter is nowhere in sight, which is a good thing because when anti-matter comes in contact with matter, they annihilate each other, he said.

Even though science is mostly concerned with how the world works and religion looks at why things are the way they are, he said, science, too, has the problem of figuring out why the universe didn’t destroy itself and instead left matter in its wake.

“Where do things come from, why we are here are the questions that every culture throughout history has asked and every culture has its theory,” he said.

Raphael Bousso, a physicist at the University of California Berkeley, said that theoretically “the universe should be very unfriendly to life.” However, the many parameters of nature “appear rather carefully tuned to us at first sight.”

“Naively it looks like somebody was playing with a lot of dials and turning them exactly to the right places to end up with this large, complex-rich set of phenomena that we see when we look out the window and that, from a scientist’s point of view, is a very bizarre situation to be faced with,” he said.

However, he cautions against what has been called “the God of the gaps,” using God to explain away what science has not been able to explain so far.

Science never faces an impasse by saying, “Oh, there’s some larger power at work that’s responsible for that and we have to give up and stop here,” he said.

Believing in God should never be because it’s the only explanation for the current mysteries of the universe, he said.

One theory for the atypically complex and fit-for-life world is called string theory, he said, which hypothesizes that the universe contains diverse regions that are each larger than the observed universe.

Bousso, an expert in string theory, said a string-theory landscape means there is no one unique way to create three-dimensional worlds and the different laws of physics “are set completely randomly all over the place.”

“We shouldn’t be terribly surprised to find ourselves in a place that seems naively carefully tuned for life,” because, according to string theory, it’s a matter of “throwing the dice so many times that eventually, you win.” 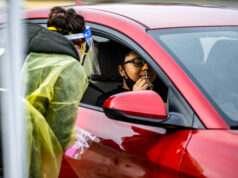 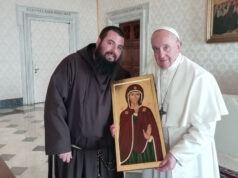