SMYRNA – Salesianum’s soccer team posed in the net, eight fingers extended to signify the school’s eighth consecutive state championship. But this was the first time this group of seniors had allowed the opponent to score in the final, and it took a herculean effort from goalkeeper Emmett McCloskey to preserve a 2-1 victory over Appoquinimink on Nov. 18 at Smyrna High School.

Bryce Wallace was the offensive hero for Sallies, scoring twice in his final high school game. That includes the title-clincher in the 57th minute, where Ethan Lupichuk took a pass from Drew Blackwell deep into the corner to the left of the Appo goal and sent a cross into the crease in front of Jaguars keeper Jason Sommer. Wallace came streaking up the middle of the box and slid, knocking the ball into the net.

“I just saw an opportunity from deep. I ran in late. It was a really good ball from Ethan; it was one of the best ones of the night. I was really lucky to get there with a slide, and I was able to get it underneath the goalie,” Wallace said.

But the Jaguars did not fold, instead ratcheting up the offense in the final 20 minutes and testing McCloskey several times. The first came in the 67th, when Joseph Gaus found himself free eight yards in front of the keeper, but his turnaround shot was smothered by McCloskey. Ten minutes later, McCloskey made a diving stop on Mario DellaMonica, and the rebound went out of bounds. A Jags corner kick in the 79th minute spent a long time in the box but was finally cleared by the Sals.

Finally, in the closing minute of play, McCloskey covered a header. The whistle blew shortly thereafter, and the Sals were able to exhale and celebrate.

“I won’t lie. I was pretty happy with (his saves),” McCloskey said. “I was a little nervous. They got the ball in our end a lot, but I was able to come up big and so were my defenders to help us keep the ball out of the back of the net.”

After a chippy, scoreless first half, the Sals hit the scoreboard early in the second. Sommer punched out an attempt off a corner kick, but Blackwell was there to pick up the loose ball. Jack Leonard got a head on Blackwell’s pass, and Wallace added a second header high over Sommer. The keeper got an outstretched hand on the ball but was unable to keep it out, giving top-seeded Salesianum the 1-0 lead.

Anthony Dina got the equalizer for the Jaguars in the 55th. His free kick from 25 yards out deflected off the Sallies’ wall and rolled past a helpless McCloskey. But the Sals answered quickly with Wallace’s second.

Wallace said having to battle for a title is more fulfilling than coasting. “It’s a different experience when it’s so close. In a game like this, especially senior year … there was so much pressure on us and we were playing to that final whistle. We all gave it everything we had, and it was so much more satisfying.”

This was a rematch of last year’s championship game, won by the Sals, 2-0, and was the third time the teams had met in the final. The other, in 2013, was the last in which Salesianum had allowed a goal. The Sals and Jaguars also met this year in the regular season, with Salesianum scoring a 2-0 win.

The title is Sallies’ 17th overall and the 14th for coach Scott Mosier. 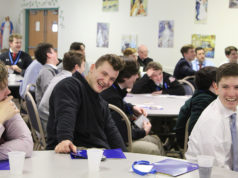 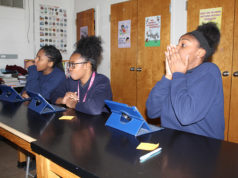 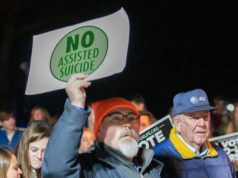