GREENVILLE — Hodgson’s top-ranked football team made several big plays on offense, and the Silver Eagles mixed in some key defensive stops in a 33-20 win over Salesianum on Oct. 25 at A.I. DuPont High School.

Salesianum received the ball to open the game and started at their own 39-yard line after a solid return from Joey Montooth. The night got off to a positive start for the offense as Andrew Watkins took the handoff on first down for 26 yards to the Silver Eagles’ 35, but Hodgson largely stymied the Sals’ running game after that. They forced Sallies into a fourth and eight, and Ny’Ghee Lolley intercepted a pass to end the drive.

It didn’t take long for the Silver Eagles to put the big plays on display. A penalty knocked the starting point back to their own 24, and after an incomplete pass, quarterback C.J. Henry struck for the first time. He dropped back to pass and, seeing no one open, scrambled right. Henry outraced several Salesianum defenders down the right sideline for a 76-yard touchdown three minutes into the contest.

Neither team could get much going offensively as the quarter progressed. The Sals took over late in the first at the Silver Eagles’ 31 after forcing a Hodgson punt from deep in the end zone, but the drive stalled inside the 10. Hunter Simmons drilled a 27-yard field goal on the first play of the second quarter.

After forcing another Silver Eagles’ punt, Sallies took over at their own 33. Quarterback Dylan Mooney soon found Jehoshua Johnson all alone on a play-action pass, and he took the ball all the way to the Silver Eagles’ 15 for a 52-yard gain. Once more, the defense stiffened, and the Sals settled for another Simmons field goal, this one from 36 yards, to cut the deficit to 7-6.

Hodgson took over at their own 20, but a holding penalty moved them back to the 13. That was not an issue. On second-and-12 from the 18, Henry hit Elizjah Lewis in stride at the Sals’ 42, and Lewis, who was five yards behind the closest defender, would not be caught. The 82-yard pass reception put Hodgson up, 14-6.

Henry made something happen midway through the second quarter. With Hodgson backed up to its own nine-yard line, Henry ran a quarterback draw for 62 yards up the middle to the Salesianum 29. The Silver Eagles faced a fourth down and 14 from the 33, but Henry coolly dropped straight back and found Lolley alone in the front corner of the end zone. After a missed extra point, Hodgson’s lead was 20-6.

The Sals had a quality opportunity to cut into that lead before halftime, but the Silver Eagles were equal to the task. Hodgson was responsible for putting Sallies in scoring position. Three personal fouls – one on the kick return, and two on one play – moved the ball 45 yards for Salesianum to the Hodgson 16. Mooney hit Liam Mara with a pass on first down to the Silver Eagles’ one.

The Sals lost three yards on a first-down run, but an unsportsmanlike conduct penalty on Hodgson – their seventh personal foul of the half and fourth of the drive – gave Sallies a first down again inside the one. But three inside running plays resulted in a loss of three yards, and on fourth down from the four, Mooney’s pass to Jack Healy in the corner of the end zone was knocked out of the receiver’s hands.

Healy put the Sals in business two plays into the third quarter, intercepting a Henry pass and returning it to the Hodgson 19. Mooney hit Rasheen Caulk for a short gain. On fourth down from the 13, Mooney escaped pressure and found a leaping Johnson for a touchdown. The extra point was no good, and the Hodgson lead was 20-12 with 9:40 left in the third.

The Silver Eagles answered immediately with another big play. On the first play after the kickoff, Josh Ames sprinted up the middle of the field, shook a few defenders and reached the Sals’ 10-yard line before being knocked out of bounds. The 70-yard scamper set up Henry for his second running touchdown. This one came on fourth and goal from the 11, as the quarterback dropped back to pass, saw nothing open, and found a hole to his left to run untouched into the end zone.

The Sals’ last scoring drive began at their own 40 with two minutes left in the third. Just over a minute into the fourth, Mooney hit Rasheen Caulk on a crossing pattern over the middle, and Caulk dragged a defender into the end zone for a touchdown. The two-point conversion brought the Sals to within 27-20.

But the Silver Eagles had one more trick up their sleeve. After taking over on downs at the Sals’ 45 with 6:40 left, they went to the ground game, advancing to the Sals’ 25. A penalty set them back five yards and made it third and nine from the 30. This time, Henry dropped back and fired to Lolley, who snuck a foot inside the sideline in the end zone for a score. The conversion was no good, but it would not be needed.

The Sals fell to 5-3 and host Middletown next Saturday night at Brandywine High School at 7. Hodgson remained undefeated at 8-0; the Silver Eagles travel to William Penn next Saturday at 1 p.m. 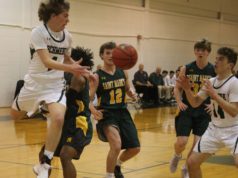 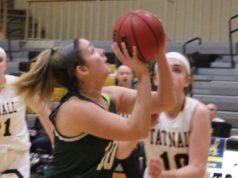