WILMINGTON — It was Senior Night at Padua on Feb. 20, and Padua and Archmere did not disappoint the capacity crowd. Brooke Emmi scored on a layup with 21 seconds to go in overtime to lead the Pandas to a 64-62 win over the Auks.

Tess McMenamin found Emmi wide open cutting to the hoop, bringing an 80-second possession to its conclusion. The hoop put the Pandas on top, 63-62, but there was plenty of time left for the Auks to answer back. Archmere had one opportunity end in a turnover, and after a missed free throw by Padua, the Auks got another shot.

This time, Fiona Teaney had a decent look on a three-point attempt, but the ball bounced of the back of the rim. The Pandas added one more free throw, and a last-second inbounds pass by the Auks was intercepted.

Emmi’s shot capped a wildly entertaining, back-and-forth game that saw both teams take turns with the lead. But as the fourth quarter began, it appeared as if the Auks were going to pull away.

They led, 45-43, as the fourth quarter began. Teaney began the scoring with her sixth three-pointer of the night, and she picked up an assist on a Lauren Kim floater to push the score to 50-43. The Auks got the ball back, and Madison Stewart banked a shot in. Padua missed on its next chance, and Stewart rebounded and went the length of the floor for a layup. The lead for the Auks was 54-43, and Pandas coach Sheila DiNardo called a timeout.

The first bucket after the break, however, was a triple for Kim, extending the Auks’ advantage to its largest of the night at 14 with less than four minutes to go.

The Pandas’ all-state forward, Michelle Kozicki, then went to work, continuing a monster second half. She hit a mid-range jumper, then followed that with a three-point shot. Stewart got two points back, but Kozicki drained a baseline three, cutting the Archmere lead to 59-51.

An errant pass gave the ball back to the Pandas, and Kate MacLennan scored on a put-back. The Auks called for time, but they turned the ball over to Padua on a traveling call. McMenamin made them pay, hitting a three-pointer from the corner to make it 59-56 Auks with 1:25 to go.

Padua’s intense pressure defense caused two more turnovers, and after the second, Kozicki was fouled and hit two free throws. The Pandas regained possession on a held ball with 44 seconds left, and Kozicki found a cutting Emmi underneath for a layup, putting the hosts on top by a point with 27.9 to go.

That was the end for Kozicki, who fouled out with 18.5 seconds left. Archmere’s Madison Stewart was fouled, but she was injured and had to leave the game. Elise Angiullo checked in for the first time all night, and with all eyes in the gym on her, tied the game at 60 by making the second of two free throws. The Pandas missed two opportunities in the closing seconds of regulation.

Padua took the first lead of the extra session on a McMenamin foul shot, but Teaney responded shortly thereafter by poking the ball loose from a Panda and taking it in for a transition hoop. Those were Archmere’s only points of the overtime, however, and the Pandas were able to complete the comeback.

Early on, it was all Pandas. They scored the first seven points, but the Auks were hot from beyond the arc. The fought back, and Emma Gioffre beat the buzzer at the end of the first with a three-pointer that tied the game at 16.

Kozicki picked up her second foul midway through the second quarter with Archmere in front, 24-20, and while she was out the Auks took advantage. McMenamin scored to bring Padua to within two at 24-22, but Teaney went on a tear, scoring 10 straight before Quickel ended that run with a triple. Izzy Gioffre’s last-second put back put the Auks up by 11 at the break.

Kozicki and Quickel did nearly all of Padua’s damage in the third, combining for 16 of the team’s 18 points as they climbed back into the game.

Kozicki scored 28 points, including four three-pointers, before fouling out. Quickel contributed 13, while McMenamin had 12. The Pandas (12-6) conclude the regular season on Tuesday at Woodbridge. Tipoff is at 7 p.m.

For the Auks (14-6), Teaney had 24. She was joined in double figures by Stewart (16) and Izzy Gioffre (11). Archmere now waits to find out its state tournament seeding. The brackets will be revealed on Feb. 28. 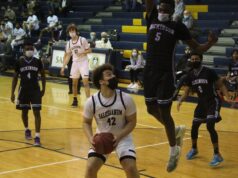 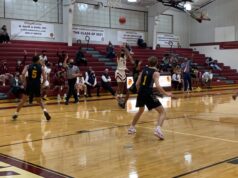 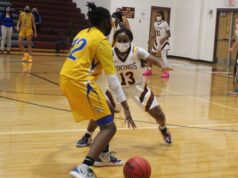