MILLTOWN – Grant Evans hit a grand slam in a six-run fifth inning to lead Cape Henlopen to a 10-8 victory at St. Mark’s in nonconference baseball on May 17. It was the regular-season finale for both teams, who will find out their state tournament fates on Monday night.

The offenses were cooking for both teams, and no lead was safe. The Spartans, trailing 10-6 after the Vikings’ outburst, plated single runs in the fifth and seventh innings, but they could not complete the comeback.

It was senior day at St. Mark’s, and the charged-up Spartans’ veterans came out swinging. Ricky Gannett led off the bottom of the first with a blast over the fence in left-center field, but the team was just getting started. J.J. Psenicska singled, and Eric Ludman reached on an error, putting runners at second and third. Matt Phillips singled up the middle, driving in both runners and giving himself a 3-0 lead after one.

The lead would not last, however, as Cape leveled the score in the second. A sharp grounder off the bat of bat of Robert Baxley took a bad hop and glanced off Ludman’s head for a single with one out. Evans walked, and Hunter Rauch doubled down the left-field line, scoring Baxley. A pair of fielder’s choices – one each by Luke Smailer and Timothy Vitella – tied the score.

St. Mark’s bats remained hot in their half of the second. Jaden Todd walked, and Gannett was hit by a pitch. After a sacrifice bunt, Ludman smoked a triple to the fence in left-center, scoring both runners. Phillips then doubled to bring Ludman, restoring the three-run lead.

Mason Fluharty roped a home run to open the third inning, and that would be the end of the scoring until the Vikings’ big inning.

Parker Brown relieved Fluharty in the second and threw 5.1 innings, allowing just one earned run as he picked up the win. The Vikings finished the season 13-5 and will begin the defense of their state championship next week.

Phillips had three hits for the Spartans, who ended the season 12-6. They will be playing in the postseason. 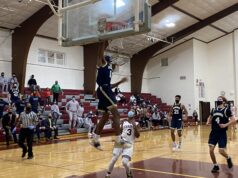 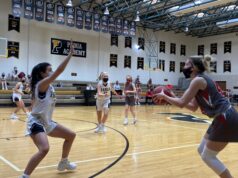