Home Our Diocese A perfect ending for Reeder at Salesianum

WILMINGTON – For Troy Reeder, the recently completed football season had just about everything he could have hoped for. His team, Salesianum, lost just one game en route to its first state title since 2009. From a personal standpoint, Reeder was a two-way first team all-state selection and was named Delaware’s defensive player of the year. Earlier this year, he announced that he would play college football at Penn State.

But the latest accolade in a season full of them stands out for the 6-foot, 3-inch, 230-lb. Reeder, a middle linebacker and running back. In December, he was named the winner of the Michael DeLucia Sportsmanship Award, presented annually to a senior on one of Delaware’s Catholic high school football teams for outstanding performance, attitude and character on and off the field.

It is presented by Tom and Pat DeLucia of Wilmington in honor of their son, who died in 1971 from meningitis at the age of 18 months.

“It means a lot,” Reeder said this week at Salesianum. “After I won it, I started to learn more about the award, and the more I learned, the more proud I was to have earned it. I know there were a lot of deserving people that would have been great recipients, but I’m just very honored that they chose me.”

Reeder said this season, which ended with a championship-game win over Middletown, was satisfying.

“Everything just fell into place. We got a chance to redeem ourselves

against a team that beat us twice last year, including in the state championship. We completed the triple crown, which had not been done for a long time. It was our senior year, which made it even better, and we also had not won a state championship since I had been here, so that was just the perfect way to go out for me.”

The triple crown to which he referred is state championships in cross country and soccer in addition to football.

He noted that the team was very talented, featuring University of Pittsburgh recruit Brian O’Neill and Tyler Marroni at receiver, Daulton Gregory in the backfield, a maligned offensive line that turned out to be rock solid, and quarterback Matt Sgro, who opened eyes across the state with his play this season.

“I think something special about our football team this year was just how we bonded as a team. We had a team that was already very close, and we had a team that we knew was very skilled,” he said. “And defensively, I think that was our best defense since we had been at Sallies.”

Reeder said he is still committed to Penn State, although he will reassess his situation once the university hires a new football coach. The previous head coach, Bill O’Brien, is now with the Houston Texans of the National Football League, and the fate of his staff is unknown, although some likely will follow him to the NFL. (National signing day, when the verbal commitments are put on paper, is in February.) He said his decision to go to Penn State was not based on one person.

“Love the campus, love the fan base, the game-day experience, the academics. It’s the whole package. Right now, I’m just anxious to see who’s going to be the coach,” he said.

“I’ll probably wait and see who the next head coach will be and see who they name to their staff and re-analyze everything, but right now I’m fully committed to Penn State. I know that’s a great school, and I picked it for the school and not just for one person or a few people.”

(Update: Various media outlets reported Thursday that Vanderbilt head coach James Franklin has been offered the Penn State job. As of mid-afternoon, he had not formally accepted the position.)

He will follow another Salesianum graduate, Andrew Szczerba, a 2007 alumnus, to Happy Valley. Reeder said Sallies was the right place for him when it came to choosing a high school.

“I came here to have academic and athletic success,” he said. “I wanted to go to a place where I knew it was going to take me to the next level no matter what I chose to do. In my time here, there wasn’t a school that could have pushed me to become the best student-athlete that I could have been. They’ve prepared me to reach that next level and now I feel ready to do it more so than if I had gone to any other school.”

Football is not the only sport in which he excels. Reeder is also one of the best lacrosse players in Delaware and has been a part of three state championship teams. He said he is unsure if he will play this season or concentrate on working out in order to get to Penn State in top football condition.

If he does give up lacrosse, it will not be an easy call.

“One of my favorite people, Coach (Bob) Healy, has just been great to play for. We have so much fun out there. Last year we stepped it up and went from winning two state championships to trying to be recognized nationally and finished 17th in the nation, which was huge for us and huge for the state of Delaware.”

Reeder has been huge for Salesianum, leaving a legacy that will be remembered for some time. The DeLucia Award merely confirms what scholastic football observers have known for the last four years. 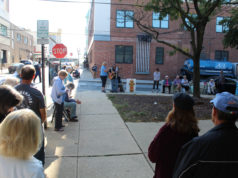 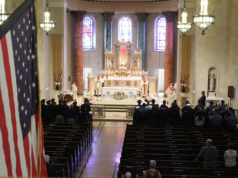 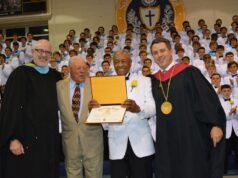