An Archmere Academy junior has spent much of her time at home over the past three weeks working to help those combating the coronavirus. The journey to making personal protective equipment involved Amazon, YouTube and a personal investment.

Margaret Atkins spent the Easter break searching for a way to get involved in the fight against the virus. One idea was to sew masks, but then she heard about a junior at Strath Haven High School in Delaware County, Pa., near her home in Swarthmore. The Strath Haven student, Taylor Duchinski, was printing components for masks for workers in nearby cities. That, she decided, is what she wanted to do. She reached out to Duchinski and got to work.

Unable to borrow a printer from Archmere, Atkins did the next-best thing.

“I used my own money, and I went to Amazon and bought all the components to build a 3D printer myself and program it. It took me about three days to build it and calibrate it. Once I had done all that, I used a program from a company in Italy that makes the facemasks,” the 16-year-old said.

Using donations from friends and family has allowed to produce a bunch of masks over the past three weeks. Atkins, Duchinski and an Archmere freshman recruited by Atkins, Austin Curtis, had produced about 1,400 masks as of April 27, with a goal of 3,600. They print the visors, then attach the components. Requests have come from professionals in Baltimore, Florida and the New York City area.

“These masks take about an hour to print. It would be great if anyone … has a 3D printer and would like to help the cause,” she said.

Atkins’ mother is a computer scientist, but she built and programmed her printer on her own.

“I watched a lot of YouTube videos,” she said. “Troubleshooting for 3D printers is so hard. You never know the problem. There’s no way to see what’s wrong.”

But she is determined to continue with this work as long as she can get the materials. She would rather have the need for the masks disappear.

“I hope I don’t have to keep going. I hope the spread of corona stops. But I am going to keep making them. If any local hospitals would like to request them, they can fill out the Google form.”

To support Atkins’ and Duchinski’s effort, go to this GoFundMe page. Healthcare facilities interested in receiving the masks can submit a request. 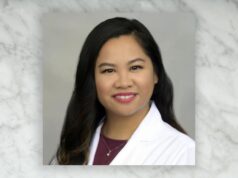 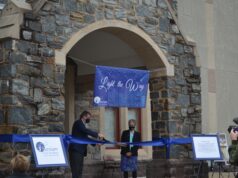 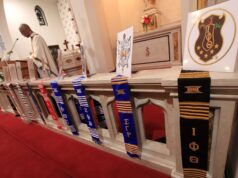