WILMINGTON – Backed by a vociferous student section, the St. Elizabeth boys’ basketball team did not let a 12-6 deficit after one quarter against Salesianum get to them. The Vikings took control in the second, using a 14-point run to take a lead on their way to a 68-63 win Friday night at a sold-out St. E Center.
St. Elizabeth received balanced scoring, but the leaders were sophomores Jordan Money and Malik Curry, who helped their team control the inside game. The Vikings consistently outrebounded Salesianum, converting a number of those boards into easy baskets. They also got the Sals into foul trouble, and St. Elizabeth would make Salesianum pay for their sins down the stretch, when they hit a ton of free throws.

Money got the scoring started just three seconds into the game. He took the opening tip and streaked in for a layup, but it was the Sals’ outside game that was the story of the first quarter. Senior Shane Clark came out of fire, scoring 10 straight points for Salesianum, and the Sals took a 12-6 lead into the second.
A few minutes into the second, Clark took a backdoor pass from classmate Donte DiVincenzo and hit a reverse layup to give the Sals a 16-10 lead, but that is when St. Elizabeth came alive. After a nice spin move resulted in a layup for freshman Chris Cropper trimmed the deficit to 16-14, Curry took the spotlight. He tied it with a steal at midcourt and a stuff, then gave the Vikings the lead on the next possession with an identical play.
After a Salesianum timeout, the Sals turned it over. Senior Mike Piekarski hit a three-point shot, and Cropper followed with an old-fashioned three-point play to make it 24-16 St. Elizabeth. The Sals scored the last five points before the half, and it was 24-21 at the break.
Salesianum managed to stay in the game through three quarters without any scoring from Donte DiVincenzo. The senior was held scoreless until the final seconds of the third, when he hit a free throw. Vikings coach Dick Rago said his defense was designed to limit the contributions from the state’s best player.
“We put him with what I call our matchup box. It’s not really a box and one,” he said. “We figured if we could stop him we could win the ballgame. It worked for three quarters.”
The key, he said, was senior Mike Piekarski, who was assigned to DiVincenzo. Piekarski was also a key piece of the offense. He played point guard for the first time all season as Rago went to a big lineup against the Sals. He thought this lineup would give the Vikings more scoring options.
Money provided the bulk of the scoring in the third for St. Elizabeth. He scored 11 of the team’s 19 points, while freshman Nate Thomas added six key points in the stanza. As the quarter went on, Salesianum picked up a number of personal fouls, which would be critical in the fourth.
Money said his coaches have been on him to move faster without the ball in order to create more offensive opportunities. The coaches, he said, were correct.
The Vikings’ lead was as high as 13, at 53-40, and the crowd was in a frenzy. Money provided two of the highlights with a dunk off a missed shot, then an alley oop. DiVicenzo found his stroke, nailing back-to-back three-point shots to cut it to seven with 4:24 to go. Money restored the double-digit lead at 61-51 on yet another dunk, but he was called for a technical foul for doing a pull-up on the rim. Clark hit the two technical foul shots, and DiVincenzo followed with a dunk.
But the Vikings were able to hold on thanks to clutch free-throw shooting. In the double bonus for nearly the entire fourth quarter, the team hit 15 of 21 foul shots in the frame; the Vikings’ final seven points came from the charity stripe. Curry alone took 12 foul shots in the quarter, hitting nine.
DiVincenzo nearly single-handedly kept the Sals in the game in the fourth. He scored 21 points, including four three-pointers, and Clark had his team’s other five points. But in the end, the hill was too tall for Salesianum to overcome.
The win helped the Vikings earn a split in the season series with Salesianum after a 66-58 win for the Sals on Jan. 9. Money said the difference is that the Vikings are playing more as a team. “Tonight, we worked on it, and we improved, and it resulted in a win. We decided we would really focus this game and not take any plays off.”
Rago told his team before the game to take advantage of the incredible support it would receive from the St. Elizabeth faithful, particularly the large student section.
“I told them we’ve never had a crowd like this. These crowds usually come out to see all the other teams. I told them we’re one of those teams now. We’ve already beaten a great Concord team. We’ve already beaten a good Howard team. We needed to show that we could do it this game, and they did it,” Rago said.

Clark finished with a game-high 24 points, while DiVincenzo had 22 and Vince Paoli added nine. Salesianum is off until Thursday, when they host A.I. duPont for a 7:30 p.m. start. 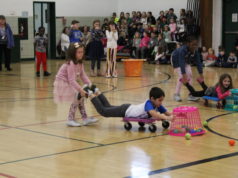 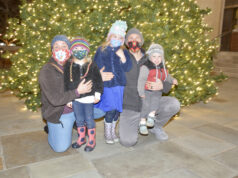