ASTON, Pa. – Sister Dorothy Epple, a Sister of St. Francis of Philadelphia who taught for two years at Padua Academy, died June 24 in Assisi House. She was 86 and had been a professed member of the congregation for 66 years.

Sister Dorothy, formerly known as Sister Anne Jerome, was at Padua from 1983-85. A Baltimore native, she spent 30 years in York, Pa., in the Diocese of Harrisburg, and she also ministered in the archdioceses of Philadelphia and Baltimore, and in the Diocee of Trenton.

Services will be June 30 in Assisi House, 610 Red Hill Road, Aston. A Christian wake service will start at 9:30 a.m., followed by a viewing, with Mass of Christian Burial at 11 a.m. Burial will be in Our Lady of Angels Cemetery. Donations in her name can be made to the Sisters of St. Francis Foundation, 609 S. Convent Road, Aston, PA 19014. 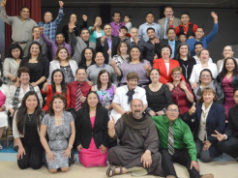