A longtime deacon at St. Michael the Archangel Parish in Georgetown and its mission church, Mary Mother of Peace in Millsboro, remembered former pastor Father Robert Burk as someone who treated his parishioners as family and had the ability to get everyone to work collaboratively.

Father Burk, a member of the Society of the Missionaries of the Holy Apostles, died May 5. He was 72.

Father Burk “would, as the head of a family, encourage the members to grow and expand the parish using their God-given abilities,” Deacon David McDowell said.

Born in Ambridge, Pa., he served in the U.S. Army for 26 years after his graduation from West Penn Nursing School, retiring as a colonel.

He was a late vocation, entering the seminary in 1998 after having been married and widowed. Ordained in November 2003, he arrived at St. Michael the Archangel in June 2004 as associate pastor.

In 2008 Father Burk became the administrator of St. Michael’s and Mary Mother of Peace when Father Dan McCloskey went on medical leave, and he was pastor from October 2011 until he retired last November for health reasons.

While he was pastor, repairs were made to both churches. The heating and air conditioning systems were upgraded at St. Michael the Archangel, and the roof and air conditioning were fixed at Mary Mother of Peace. A vesting room for priests and deacons was completed in Millsboro in the spring of 2013.

Deacon McDowell said Father Burk also expanded the services the church offered to the community. He established Mary’s House, a food pantry for the area, and began biannual healing Masses with the St. Peregrine Society. St. Peregrine is the patron saint of those with cancer and other life-threatening illnesses. He also established a network for parishioners who were sick, grieving or had other needs.

“Father Bob loved being a priest,” Deacon McDowell said. “He was in love with the sacraments. He loved saying Mass, hearing confessions and anointing the sick.

As a family man, the deacon added, Father Burk loved any gathering of his parish “as long as it was Christ-centered and family led.”

Bishop Malooly presided at a Mass of Christian Burial on May 10 at Mary Mother of Peace Church, 30839 Mount Joy Road, Millsboro, after a viewing there. Burial was in Arlington National Cemetery. 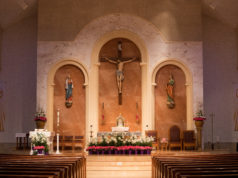 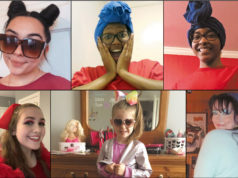 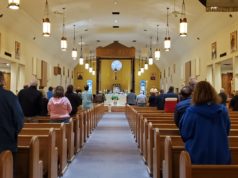 St. Elizabeth School in Wilmington tips its cap to musical performers in spite of...