Joe Hemphill and Sarah Gause Flanders are among 10 people who will be inducted into the Delaware Sports Museum and Hall of Fame at the organization’s annual banquet, to be held May 5 at the Chase Center on the Riverfront in Wilmington.

Hemphill retired from St. Elizabeth High School in early 2014 after serving there for 42 years as the football coach and 41 as athletic director. He also coached golf. In football, the Vikings won three state titles – in 1994, 1996 and 2010 – and reached the championship two other times.

Hemphill, who played quarterback at St. Elizabeth and Wesley College, coached 430 games, which was more than any other Delaware coach when he retired. He amassed a record of 237-180-13. He coached the Blue team twice in the annual Blue-Gold game and was the Blue-Gold camp director for 15 years. At St. Elizabeth, he also served as a guidance counselor and psychology teacher.

As athletic director, he oversaw a growing sports program and the opening of the St. E Center, which includes the 1,000-seat gymnasium, classrooms, exercise facilities and office space.

Flanders was a standout in basketball and track and field for Ursuline Academy, from which she graduated in 1982. She scored more than 1,000 points for the Raiders and continued her hoops career at the University of Delaware.

She was the first player in Delaware basketball, male or female, to be named first-team all-state, which she accomplished in 1980, ’81 and ’82. Flanders attended Georgetown University as a freshman but transferred to Delaware for her final three years. In Newark, she led the Blue Hens to a 56-28 record in three seasons, and upon graduation she was among the career leaders in points, rebounds and blocked shots. In 1984-85, she was the East Coast Conference player of the year.

Flanders was also an accomplished athlete in track and field. At Ursuline, she won the Division II championship in high jump twice and the shot put once. In college, she was among the top throwers in the ECC, finishing third in the conference shot put competition in 1983 and ’85 and fourth in 1984.

Flanders is currently an assistant nurse manager in the Wilmington Hospital emergency department.

The other inductees are:

Doors at the Chase Center open for the induction banquet at 5:30 p.m. on May 5, with a social hour and silent auction preceding dinner at 6:45. For tickets, contact Sue Holloway at sueholloway@comcast.net or (302) 992-0550. Tickets are $65 each, and tables for 10 are available. No tickets will be sold after April 27. Checks can be made payable to DMSHOF and sent to Sue Holloway, 3 Blackberry Lane, Wilmington, DE 19807. 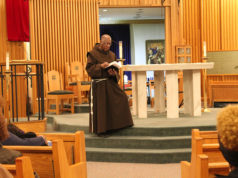 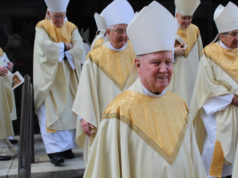 Bishops Barres, Malooly feel spirit of Archbishop Nelson Perez; ‘great for addressing problems and not alienating people as he does it’ — Photo gallery