WILMINGTON – A few years ago, Father Jay McKee introduced a program at his parish, Good Shepherd in Perryville, Md., to expose middle-school children to religious life. So when Bishop Malooly introduced his priorities for the diocese in 2013, one of which was to address vocations, Father McKee went to work planning a similar program for the entire diocese.

Last week, and with the significant assistance of the Office of Catholic Schools and others, the diocesan Office of Priestly and Religious Vocations, headed by Father David F. Kelley, held four events featuring priests, brothers and sisters speaking to sixth-grade students about their vocations. They were held at All Saints Catholic School, Christ the Teacher Catholic School, St. Edmond’s Academy and Holy Cross School.

“For a first experience, awesome, just awesome,” he said at St. Edmond’s. “It’s nice to see it come alive. The students have been very attentive and fascinated by the stories.”

Father McKee said a fellow member of the diocesan vocations team, Father Charles Dillingham, pastor of St. Mary of the Assumption Parish in Hockessin, held a similar event in the 1980s. He said he was pleased with the attention the students paid to the priests, brothers and sisters who gave of their time to tell their stories.

There was a reason sixth grade was selected, he said.

“Research has shown that a sixth-grader starts to think about what they want to be when they grow up, so to speak. We want to give priestly and religious life a fair shake in there, too,” Father McKee said.

According to the bishop’s priorities, promoting religious vocations is the responsibility of the entire church.

“All of us, bishop, priest, religious, and laity, must redouble our efforts to not only create new vocation programs, but also to find ways to raise the image of priesthood and provide an improved catechesis for the laity on the essential need for priests, so they in turn will encourage their sons to consider this sacred way of life,” Bishop Malooly wrote.

The events during Vocations Awareness Week fulfill a recommendation made by the bishop’s committee that the vocations office should work with other diocesan offices to develop a collaborative vocations strategy. The committee also developed recommendations to target age-specific audiences.

Bishop Malooly also released a message for National Vocations Awareness Week. It can be seen on the YouTube channel at www.youtube.com/watch?v=yGdQh0goCvQ.

Logistical issues make this kind of outreach hard to accomplish with parish religious education programs, but Father McKee said the vocations team has something called “Vianney Vocations,” an online resource that could be incorporated into parishes, ready to go. The team is in search of funding for this effort.

“It would be something the catechists could do right in the classroom,” he said.

Father Dillingham said the vocations team would like to make this an annual event during National Vocations Awareness Week, which is the first week of November. The support the team received was phenomenal, he said.

“Dr. Lou DeAngelo and the Catholic Schools Office really stepped up and did a lot of organization. Our host schools deserve a lot of credit and the teachers who came with the students. Everybody worked really hard. We have such great cooperation,” he said. 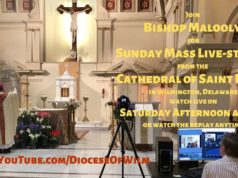 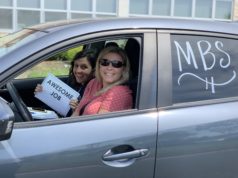 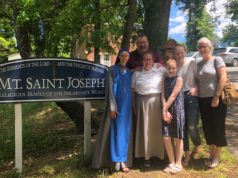