During a short talk at a meeting of cardinals who were about to enter a conclave to elect a new pope, Cardinal Jorge Bergoglio said he hoped the church would be less inward-looking, less self-referential.

The Buenos Aires cardinal called for a pope who would be centered in Jesus Christ and help the church go out to the “existential peripheries,” the outskirts of society to find the “joy of evangelizing.”

Cardinal Bergoglio was soon elected pope, and as Francis he has been emphasizing the mission statement he offered for his job.

Solidarity, the partnership between the Diocese of Wilmington and the Diocese of San Marcos in Guatemala, has been going out to the peripheries for all its 12-year history. It sends delegations from Wilmington to the poor Latin America diocese to befriend its people, improve their impoverished conditions and, in turn, be evangelized by the deep and uncomplicated faith and hospitality of the people there.

Father John Hynes, the pastor of St. Catherine of Siena in Wilmington, who has chaired Solidarity since it began here, said this week after a trip to San Marcos, that when the program began “the periphery had come to us.” Guatemalans came here to work, to send money back to their families.

“By a very natural process, we received them and now they have received us.”

Catholics have come late to the evangelizing process, especially because priests and religious missionaries have dwindled over time, so now it’s time for laity to learn the work of evangelization, the pastor said.

Solidarity trips to San Marcos can give people 18 to 50 years old or so, a chance to go the peripheries: “A lot of young people, especially in their 20s, they need to go to the peripheries, like the church in Guatemala and experience the profound human needs, materially and intellectually” there.

Pilgrims on Solidarity’s visits will also discover the spiritual resources of the poor there, Father Hynes said.

“They seem more spiritually open to a God who is very much present among them. They’re poor and they depend on God in ways that we don’t.”

Mary Jo Froelich, who has helped run Solidarity in the diocese with Father Hynes and Father Chris Posch, the head of Hispanic Ministry, talked this week about the friendships she has established with the people there after 12 visits.

“We know these people,” she said.

Such friendships between the people and parishioners in this diocese have resulted in aid projects for Guatemalans.

Wilmington parishes have showed Solidarity with their brothers and sisters in San Marcos by raising money for clean water projects, sending funds to provide ventilated stoves that won’t cause lung disease for the women who work them, and building drainage and bathroom facilities. And diocesan schoolchildren have raised funds for scholarships for San Marcos students.

“Many of our parishioners are from Guatemala,” he told The Dialog.

At a Spanish-language Mass last week, he asked the congregation how many people had ties to Guatemala.

“Pretty much everyone raised their hand,” he said.

The priest, who studied for Hispanic ministry, said he was impressed by the “hospitality and generosity of the Guatemalan people.”

From the sisters at a religious house of formation where the Wilmington group stayed, to a senior group who met on the property each morning, “they automatically befriended us.

“The Guatemalan seniors would come out and give us hugs. They didn’t know us from Adam and Eve, but they literally embraced us.”

Father Evers said that with Father James Nash, Ss. Peter and Paul’s pastor who has also visited in San Marcos, they are planning to organize a trip to Guatemala for parishioners next spring.

Having seen firsthand the gratitude of the people who have benefited from Solidarity-funded aid, Father Evers said, “I love the beauty of the Solidarity program because we establish friendships and relationships first, then know our neighbor and what their needs are and really help them.

“We’re not just checking something off a list. We need to fill a need because we love the people, not the projects.” 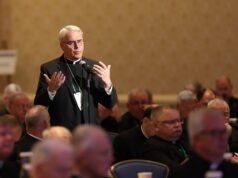