VATICAN CITY — When life feels like a dark and silent tunnel, faith gives a Christian light and music, Pope Benedict XVI said at the end of his weeklong Lenten retreat.

Congolese Cardinal Laurent Monsengwo Pasinya of Kinshasa led the pope’s retreat Feb. 26-March 3 in the Redemptoris Mater Chapel of the Apostolic Palace, offering the pope and top Vatican officials three meditations each day on the theme “Christians’ Communion With God.”

Thanking the cardinal at the end of the retreat, Pope Benedict said Cardinal Monsengwo “seasoned these meditations with beautiful stories — taken mostly from your beloved African land — which gave us joy and helped us.”

The pope said he was particularly struck by the cardinal’s story about a friend of his who was in a coma and “had the impression of being in a dark tunnel, but at the end he saw a bit of light and heard beautiful music.”

“This can be a parable of our lives,” the pope said. “Often we find ourselves in a dark tunnel in the middle of the night, but through faith we see a light at the end and hear beautiful music, perceiving the beauty of God.”

St. John’s letter speaks “of all the problems the early church encountered and that we can encounter,” issues and attitudes that break communion, the cardinal said. All of the problems boil down either to a lack of faith or a lack of love, he said.

Pope Benedict said the cardinal led him and his aides “on a journey of rediscovering the mystery of communion into which we were inserted beginning with our baptism.”

The eucharistic adoration and benediction that ended each day of the retreat, the pope said, was filled with profound gratitude to God “for the great love he gave us and which binds us to him in a filial relationship.” 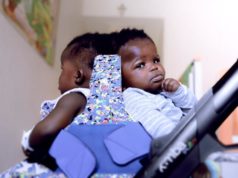 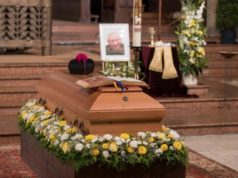 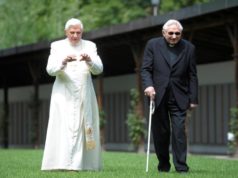