Each of the sets followed a familiar pattern. They started out as back-and-forth affairs, followed by the Spartans taking control midway through and fending off any attempts by the Pandas to close the gap.

Padua’s Mandy Quinn’s ace tied the first set at 8, but the Spartans took control by scoring 11 of the next 12 points. The offensive weapon of choice for Saint Mark’s was Julia Yurkovich, who mashed two kills, then delivered consecutive aces to push the lead to 18-9. Other points were made possible by the defense. Kyla Dow began the 11-1 run with a block, and Nicole Dimiris had one that ended it.

Padua, playing without senior hitter Mackenzie Sobczyk in the first, trailed by 10 before putting together four straight to cut it to 21-15, but the hill was too high to climb. Mya Lewis ended the set when she hit one down the middle.

Sobczyk entered the match at the beginning of the second set, but the first point was the result of some stellar work by the defensive specialists. Colleen McClintock and Quinn kept the rally alive with a pair of sensational digs, and the Spartans eventually committed a hitting error. Audrey Lyons followed with an ace for Padua. Meghan Wilhelm then stuffed an overpass for a 3-0 Pandas lead.

Kyla Dow tied things up at 3-3 when she stuffed an overpass, and the teams remained close for a bit. The Spartans created a little separation by scoring three straight to make the score 11-8. Yurkovich climbed the ladder to send one straight down, followed by a Lewis dump on a second touch. Brooke Down went down the left side for the third straight point.

The lead grew as the second proceeded, with Saint Mark’s using their height to create problems for the Pandas’ attack. Yurkovich, the Dow sisters and Lewis continued their assault up front. The Spartans went up by as many as eight, and after a Brooke Dow cross, the set ended on a net violation.

Padua held a few two-point leads as the third set unfolded, the last one at 7-5 after an ace off the tape from Sobczyk. But the Spartans responded with the next five points, prompting a Pandas timeout. The visitors cut the Spartans’ lead to 12-10 on a winner from Meghan Peters, and they went back into the lead on a hitting error, 16-15.

Lewis delivered an ace that restored a Saint Mark’s lead at 18-17, and this time the advantage was for good. A hitting error, another Yurkovich kill and another Lewis ace extended that to four. The match ended when Brooke Dow smacked a ball off the Pandas’ wall and out of bounds.

Final statistics for Padua were not available early Wednesday morning. The Pandas (8-2) wrap up the regular season Saturday at Friends at 5 p.m.

For the Spartans, Yurkovich had 17 kills and three aces. Saint Mark’s is now 10-0 and also concludes its schedule on Saturday night at 6:15 at Ursuline. 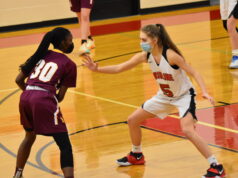 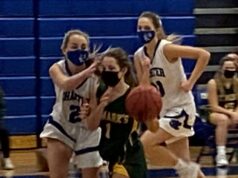