Home Entertainment Catholic church and the laity — it’s the strongest part of parish...

My buddy Dennis was the glue.

We had a couple of hundred volunteers at our parish festival every year. Some, like Dennis, were longtime, year-in and year-out stalwarts who had their own corner of the festival responsibilities that they could be relied upon to handle on an annual basis. Pierogi makers, funnel cake artists, rib-eye grillers, beer-tenders, burger and dog flippers, ice cream scoopers, money collectors and so on.

We also had the one-and-doners. Kind folks who showed up for the four-hour shifts running games-of-chance concessions, fulfilling their volunteer requirement as part of their child’s preparation for sacraments. The older kids, middle-schoolers mostly, also contributed in that vein.

But it was the lifers who held it all together. The people who came back every year, understanding the urgency, the organization it takes and the dedication to what was by far our parish’s biggest fundraiser of the year. Some very successful years saw us push the needle into six figures. Our weekend event was that successful. It was an important way to contribute to the church.

The gig for our crew was the sausage grill where we fired off sausage sandwiches with peppers and onions like nobody’s business. Dennis was in charge. He also ran the burger and dog grill, but that was second-tier, a place for the new guys to get their start. The sausages were the specialty, the headliner that brought the crowds to our tent. It was a two-man job if the two people were veterans.

Mostly it was Jim and me with the coveted spatulas and tongs because we had earned our stripes, bumped up over the years from roll-fillers to burger minders until we finally took over on the big stage. On a good night with nice weather, we had been known to fire off 800 sausage sandwiches, all with a watchful eye and helping hand from Dennis, who spent most of his time running supplies and solving problems at every station.

Every parish festival has a Dennis. The best of them have 10 to 12. Who in the world has three or four gonzo-sized tackle boxes filled with grilling and other must-have picnic equipment. Sharp knives? Got ‘em. Can opener? No problem. Oh, the local health inspector is here? No worries. Everyone is armed with a meat thermometer and requisite head covering.

Dennis would know when he got a reliable volunteer. And he would hold onto your contact information like a found lottery ticket. A month or two before the event, the phone would ring. “Joe, it’s Dennis.” Yes, Dennis, of course I’ll be there. I wouldn’t miss it.

At some point you learn that Dennis is not only a parish pillar at the annual festival.

Remember that spaghetti dinner the parish runs each winter? Yes, it turns out Dennis and his kitchen equipment are at the center of it. Huge pots of boiling water, vats of tomato sauce, mounds of meatballs. I know because he reeled me in for that a couple of times.

St. Helena’s in the Diocese of Wilmington kicked off a plentiful festival season last month. We have many, many more to come through the spring and into summer and fall.

It’s not easy. St. Hedwig’s reported last month that its vaunted Polish Festival will not be held this year because of construction issues at its festival venue. Here’s hoping it gets fixed in following years. Jump-starting the corps of volunteers is critical.

It’s a step in the right direction. We don’t have to look very far for lay people who play an integral role in parish life. It’s community at its best.

The church and its people. They are what matters most. It’s those connections that make us stronger, helping to cement people’s place in God’s house.

As for Dennis, I know he’s still going strong. The festival is a couple months away and he’ll be ready. I moved about 90 miles away from that parish several years ago and have not yet been back for the festival. I plan to get there soon.

Meanwhile, anyone know where I can get a good sausage and peppers sandwich? 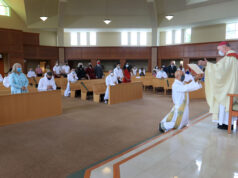 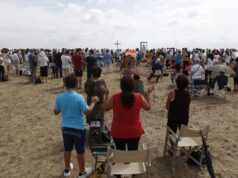 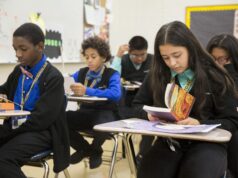