Home Education and Careers Families of Catholic institution employees to be eligible for $5,000 tuition grant...

MILLTOWN – When Saint Mark’s High School opened in 1969, it was meant to be more than the diocesan high school, principal Tom Fertal said. It was to be a resource to benefit the entire Catholic community.

Along those lines, Saint Mark’s will try to better fulfill that mission by making a Catholic secondary education more available to employees of the Catholic Church, whether in a parish, school, diocese or other officially recognized Catholic institution. The school announced that these families are eligible for a $5,000 annual grant toward tuition at Saint Mark’s beginning with the 2020-21 academic year through the “Catholic Education and Ministry Grant Program.”

“There’s nothing worse than someone who works for the church, who wants their children in Catholic school, but they can’t go financially. To me, that’s just so wrong,” Fertal said last week at Saint Mark’s. “We are the diocesan high school. By all means, we should be leading the way in making the pathway open to those who work within the diocese.”

Fertal knows the dilemma many parents encounter. He has spent nearly his entire professional life working for the Catholic Church, and he and his wife, Patricia, have six children, all of whom have attended or are currently enrolled in Catholic schools.

The announcement, which came in late October, created a buzz on social media and at the school’s open house on Oct. 27, Fertal said. He said people are happy to see the school recognize the sacrifice employees of Catholic institutions make from an earnings standpoint.

Fertal said Saint Mark’s – whose current tuition is $13,900 – has the room to accommodate more students, and additional bodies in the building will help financially, but the reasons for initiating the grant go much deeper than that.

“There’s a bigger philosophy and a bigger picture,” he said. “Philosophically, I believe that anyone who embraces our mission, who we are and what we want to do, and wants a Catholic education, a Saint Mark’s education for their child, I want to make it available.”

Fertal said he talks to parents of students in Catholic elementary schools who will not be able to afford Catholic high schools. Tuition in grammar schools is typically range from $4,000-7,000, but high school can be twice that amount. Saint Mark’s, which has endured a drop in enrollment in recent years, can’t expect to add 20 new families a year paying full tuition.

“The future is a hundred, or 200 more families, if they can pay whatever the number is, let’s meet financial need. Let’s expand the base. We’re supposed to be open to all who want to come here,” he said.

The school will still meet the educational standards it does now, he continued. And the spiritual aspect will remain “essential to who we are and what we are.”

Saint Mark’s would not be the only beneficiary of increased enrollment, he continued. Studies show that young people who attend Catholic schools remain closer to the faith as they grow older.

Students who receive the grant will need to maintain a minimum grade-point average. Qualifying families may still receive scholarships or other financial aid through other school programs. 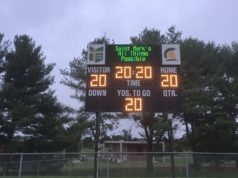 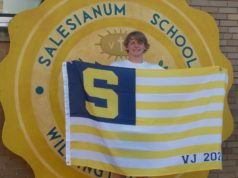 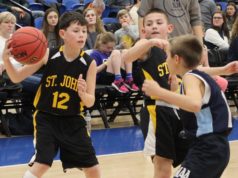