Home Education and Careers After a lifetime of moves, Ss. Peter and Paul teacher Mark Ripka...

A self-described “Army brat” took in a lot of the world while growing up, and now Mark Ripka is content to call the Eastern Shore home. His experiences from his youth, however, have influenced his career as a teacher, including the last five years at Ss. Peter and Paul High School in Easton, Md. Ripka teaches Latin at the high school.

His father’s military obligations took the family all over the place during Ripka’s youth. He lived in California, Georgia, Washington state, Texas, Alaska and Tennessee, along with some time in Germany. The constant upheaval meant he only had a few years with the friends he made in those locations, but one thing was always there.

“Books were always my friend. I left a lot of friends and moved on, so books and family were my friends. My dad’s into languages. He’s learned languages where he’s moved. He moved to Africa and Germany. It rubbed off on me there,” Ripka said recently.

After graduating from the University of Washington, he moved to Maryland to attend St. John’s College, a small liberal arts school in Annapolis that focused on the classics. He fine-tuned his language skills there, then eventually became a professor at Anne Arundel Community College teaching ancient Greek, Latin, English and philosophy.

He recalled getting a phone call from Ss. Peter and Paul principal James Nemeth, “and I didn’t answer it because I had a job.” Nemeth was not deterred and pursued Ripka.

The more he looked into Ss. Peter and Paul, the more the school’s staff and its approach of “mind, body, spirit” appealed to him.

The actual Latin language is just part of the program. The students analyze texts, and they get into the etymology and history of words. “The goal is a little different than a normal language class.”

The students do a lot of work on the classics of the Western world. Ripka tries to pepper the class with Catholic examples and works, but it’s a largely historical approach. He has added an advanced-placement class and a Latin Club to the school.

Ripka said his teaching style changes every couple of years depending on the personality of his students. He said he likes to keep it fun with a lot of jokes. He wants his students to feel safe in his classroom and assures them that mistakes are a part of learning. He prefers being back in the building, as Ss. Peter and Paul has been all year, to remote learning. He said it took a while to get rid of the bad habits developed while holding school over a computer. The word “student,” he noted, comes from the Latin word meaning to be eager for something.

“You need to be in class eager to hand your work in. We need to break the bad habits from the quarantine,” he said.

“My students seem pretty eager and happy to take some Latin, so that’s always good.”

After moving around for all those years, his parents retired to Virginia Beach, Va., so he’s not too far from them. Ripka also has settled down, buying a home in Easton. He likes the city’s art scene and also directs plays at Ss. Peter and Paul.

“It’s one of my favorite places I’ve lived, and I’ve lived all over,” he said. 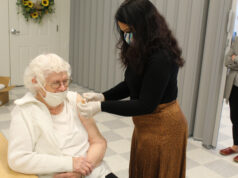 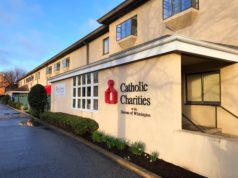 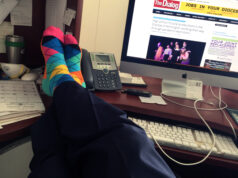