EASTON, Md. – Technically, Ss. Peter and Paul Elementary School has a new principal, but it sure doesn’t feel that way on the Eastern Shore. Sherrie Connolly, who officially assumed the top job on July 1, is known to everyone in the school community.

In fact, Connolly is in her second year as principal. She served on an interim basis last year after the position opened up in July 2019, and she has been a member of the faculty at Ss. Peter and Paul for 25 years. It has been the only place she’s worked since her college graduation. She figured she’d be back in the classroom full-time in 2020-21.

“As they were interviewing, they did not find a candidate that was someone they wanted to put forward, and they asked me to remain for the year,” Connolly said.

Her colleagues and parents urged her to apply. “So here I am.”

Connolly said she never envisioned herself in an administrative role. She loves being in the classroom and still teaches second-grade religion. She said she appreciates the help Ss. Peter and Paul High School principal James Nemeth has given her as she has acclimated to her new role. She is also enrolled in a Catholic school leadership program.

“God leads us in directions that sometimes are not the direction we thought we would be going in. You just have to be open to that. I’m happy to serve my school in any way,” she said.

The transition into a supervisory role has not been too difficult, Connolly said. She said she works with an “amazing” group of teachers and views them as colleagues.

“We all help each other with ways that we can grow. I think it’s just one step at a time. We’re all learning together, I guess,” she said.

The atmosphere at Ss. Peter and Paul is one of collaboration, she continued, and the community is like a family. That extends beyond the school building to the board and the pastor of Ss. Peter and Paul, Father Jim Nash. All are working hard, especially during the coronavirus pandemic, and the school can’t wait until it can welcome visitors back inside the building.

Connolly, 47, is no stranger to the Eastern Shore. She grew up in Kent County, Md., and attended Salisbury University. She was raised Methodist but said she spent some time with an aunt and uncle in Ridgely when she was 11. She attended Mass with them at St. Benedict Church and wanted to become Catholic.

“I immediately felt at home. When I talked to my parents on the phone that evening, I said, ‘I want to be Catholic.’ And so, they were supportive,” she said.

She began attending Catholic youth group activities with friends, and when she was 17, she joined the Catholic Church. She prepared for initiation with Father Paul Jennings, now the pastor at St. Luke/St. Andrew in Ocean City, Md.

She and her husband, Bobby, are the parents of an adult daughter. In her spare time, she likes to spend time with her family, and she likes to be outdoors. She also enjoys traveling, which has been affected by the pandemic, and reading. 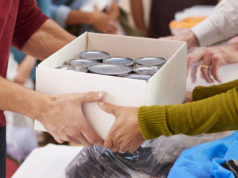