CLAYMONT — In one of the volleyball season’s most anticipated matches, Archmere and Conrad did not disappoint. The Red Wolves scratched out a win in the first set, only to see the Auks come back to take the next three for the 3-1 victory. Set scores were 22-25, 27-25, 25-18 and 25-16.

The loss knocked Conrad from the ranks of the unbeatens. Saint Mark’s remains the lone undefeated team in the state; Newark Charter lost its first match on Monday.

The evening was filled with big hits and even better defense from both teams. A big crowd was inside Moglia Fieldhouse for a Dig Pink match, and many of the fans were wearing pink to show their support for cancer survivors.

The Red Wolves opened up a 5-1 lead in the first set, but that was short-lived. Archmere fought back, and most of the set was played close to even. The Auks took a 14-10 advantage on an ace from Hannah Wright, followed by a huge block from Lauren Edmiston. But that seemed to get the Red Wolves started.

Anchored by their libero, Alyssa Faville, the visitors bounced back. They tied the score when Leah Camilli delivered an ace. Edmiston scored for Archmere, but Conrad ran off the next four points for the 19-15 lead. The Auks tied the score at 20, 21 and 22 before the Red Wolves earned the final three points. The clincher came on a smash from Julie Kulesza.

The Red Wolves, playing stellar defense, started the second set with a 4-1 advantage, but there was a lot of volleyball to be played. The lead remained at three points, 10-7, after a back-line laser from Camilli, and again at 14-11. Each time the Auks threatened, Conrad answered. In fact, the Red Wolves were just two points from a second-set win after Stefanie Kulesza blocked a big swing from Kochie. The Auks called their second timeout.

Out of the break, a new Auks team emerged. Kochie spiked one, and Archmere picked up a service winner. Kochie returned the block on Stefanie Kulesza, prompting a Conrad timeout. Colleen McCann tied the score with an ace, and a net violation gave the Auks their first set point. The Red Wolves scored the next two to reach their own set point. But Archmere scored the final three points for the extra-point win. They came on an unforced error, a Hope Merritt kill and a hitting error.

Wright said once the Auks started working as a team, their fortunes changed.

The third and fourth sets were not as dramatic, but they were filled with more good volleyball. In the third, the Auks ran off five straight midway through to build up a 14-7 lead, and there would be no big comeback this time. Ava Scarpaci and Abby Kates led the Auks’ attack, which started going for cross-court shots to avoid the Red Wolves’ defense.

Conrad could not chip into that lead, and the set ended with a tip off the hands of Scarpaci following a diving dig by Kochie, followed by a hitting error.

Kochie started the fourth set with a smash that was dug into the ceiling, and Kates got a point the easy way when she dunked an overpass. The Red Wolves answered with three straight, but as the set wore on and the lead grew, the Archmere students rose to their feet and filled the fieldhouse with cheers.

Wright put the Auks in front, 4-3, with an ace. A 6-1 run later on made it 13-6, but another Camilli crush and an net violation brought the visitors to within three at 13-10. Not discouraged, the Auks scored five straight, the last one on a Scarpaci block. Olivia Joswick went cross court to end that run, but the deficit was too great.

Scarpaci scored on a tip to make it 23-14. A Conrad attack went long, and after the Red Wolves saved two match points, a long rally ended with a hitting error.

Kochie led the Auks with 15 kills, and she had four blocks and 13 digs. Edmiston had 11 kills and five blocks. Overall, Archmere was credited with 18 blocks. The Auks improved to 10-2 and host Padua on Friday at 6:15 p.m. Wright said the team will be ready for another quality opponent.

“We’re just going to keep working hard and do what we know how to do in practices, and play together, play as a team,” she said.

For the Red Wolves, Camilli had 17 kills, while Stefanie Kulesza added eight. Faville led the way with 30 digs, many of the diving variety. Conrad (10-1) visits MOT Charter on Thursday afternoon at 5. 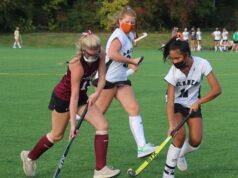 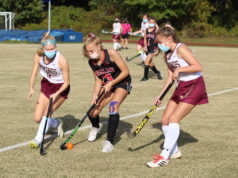 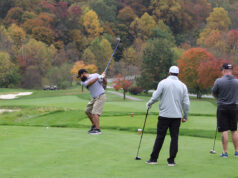